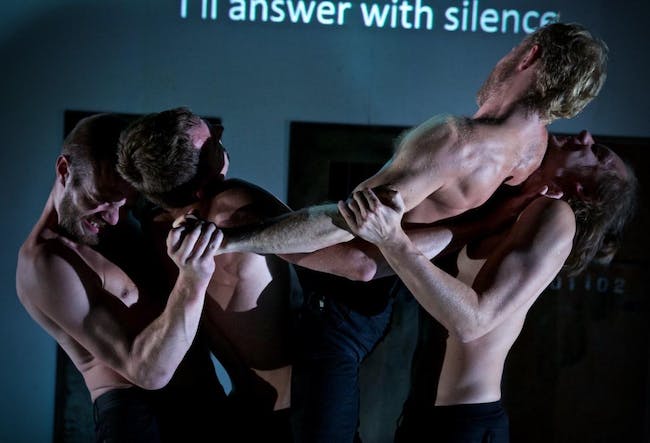 What happens when you are declared an enemy of the state simply for making art? Where do you belong when your government suppresses your basic right to expression? And how do you survive in one of the most brutal prison systems in the world? In this blazing contemporary work, Belarus Free Theatre combine forces with Pussy Riot’s Maria Alyokhina to share stories of persecuted artists, living under dictatorship, who will not be silenced. The production blends sensuous theatricality and vigorous physicality to shine a light on total suppression of artistic freedoms, drawn from the real-life stories of iconoclastic Russian performance artist Petr Pavlensky, incarcerated Ukrainian filmmaker Oleg Sentsov and Pussy Riot's Maria Alyokhina, in her stage debut.

‘The astonishment of “Burning Doors” is its ability to translate political rage and impotence into an art of indirection that is often as complex as it is powerful.’

‘Burning Doors is theatre as bracing, intelligent and visceral protest. These performers know that freedom must be fought for. And if global events over the past few years have taught us anything, it is that democracy and human rights are fragile. Complacency is not an option.’ The Age (Australia)

First performed in UK in August 2016 and subsequently toured to Italy, Australia, Finland, Germany, US, Canada and Ukraine.