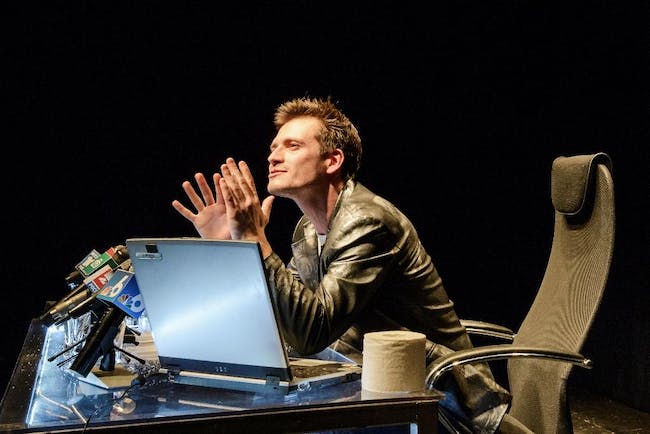 "Dreams of Hamlet" is a phantasy one-man show on the motifs of Shakespeare's tragedy. Hamlet is beyond the time, so the plot of the new performance has arisen from an attempt of "a prince of Denmark of nowadays" to realize the happened tragedy. It is like a press-conference from nowhere. A computer desk with a laptop on it, a number of microphones, a big screen behind sitting Hamlet is the scenery of the psychedelic staging by Linas Zaikauskas making an intrigue for a thinking spectator. The performance won a great love of people and deserved the best reviews of critics.

Monodrama on the motifs of the tragedy by William Shakespeare.

The performance "Dreams of Hamlet" was shown on the international stage of the Russian Centre of Science and Culture in Nicosia, Cyprus, 2017.

The performance "Dreams of Hamlet" is a participant of the V International Shakespeare's Festival in Bitole, Macedonia, 2017.

Sasha Aladyshev got the Diploma "For the Harmonic Combination of Acting and Directing" at the XXXIII International Theatre Forum "Lipetsk Theatre Meetings", 2017.

Alexander Aladyshev got the Laureate Diploma at the IX International Festival-Laboratory of Chamber theatres and small-form performances.