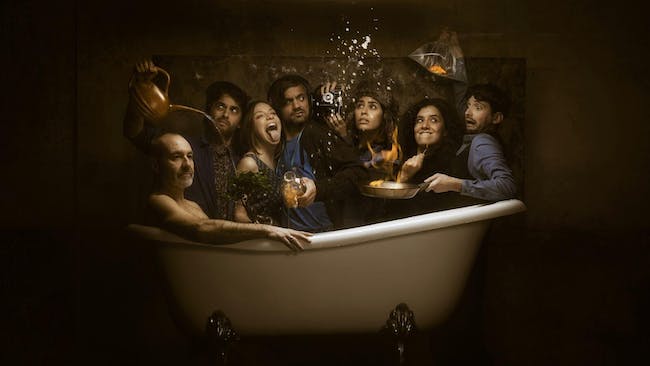 I was Prospero by Projecte Ingenu (Spain, Catalonia)

An old man who was once prosperous. A house that was once splendid. A daughter. Memory runes to be unearthed. Vestiges of a certain past? Fables to avoid forgetting? Shakespeare's last major work, “The Tempest”, serves as a starting point for Projecte Ingenu in order to explore the nature of human senescence. After “Hamlet” and “Romeo and Juliet”, the company closes a Shakespearean trilogy by fully entering a physical theatre; poetic, sometimes abstract, sometimes earthly.

“I was Prospero” is a game that offers the spectator to participate in the deliriums of an ancient mind, perhaps senile, perhaps too lucid... The delusion of an animal of memories, in Estellés’s words. An old man, isolated from the world, locked in a house, surrounded by walls that are his own memory... And oblivion, as the storm, which is coming noisily to purify everything... What stuff are we made on? We are such stuff as memories are made on.

ABOUT THE PLAY, A FEW WORDS FROM THE ARTISTIC DIRECTOR

Theater people often ask ourselves if what we put on scene is true, believable, verisimilar…

We are afraid to use the word lie, we think it takes us away from an essence that should be preserved… However, everyone assumes that theater is a lie, nothing above than a possible construction of reality that allows us to access to a feeling of verisimilitude, of credibility.

In a more or less comfortable chair, we let our brain work and perceive as real the actors performing in front of a scenery. And our brain starts working, in a very accurate way organizing partial indications to interpret it as a complete reality.

But … What happens outside the theater? What happens with what we consider “reality”? Does the brain work in the same way? Is “pure reality” as pure and real as we think, or just a set of partial clues that our brain insists on thinking that are coherent?

I was Prosperous is a game that proposes to the spectator to participate in the deliriums of an elder mind, perhaps senile, perhaps to lucid… Of an “Animal of Memories”, in the words of the Catalan poet Vicent Andrés Estellés. An old man, isolated from the world, locked in a house, behind walls that are their own memories… The oblivion, the tempest that comes and goes and returns and recovers to purify everything…

Dreams are made of the same matter as dreams.

HISTORY OF PROJECTE INGENU, THE COMPANY

Projecte Ingenu defines its methodology by the use of the Slow Theatre concept.

The slow movement is an ideological and cultural movement against the culture of immediacy: getting results fast above all else. The slow movement puts the focus on the quality, the kindness, the humanity, and the appreciation of simple things above market pressures. Thus, it opposes concretely and practicality to some tendencies born in the 20th century, within the framework of liquid modernity, which are related to capitalism, competition and mass culture. Some examples are junk food (linked to "fast food", from which the name "slow" comes from by opposition), mass tourism or disproportionate growth of consumerism.

The affinity with this trend invites us to work on the idea of contemporary theatre from an ideological perspective. The concept applies to both the aesthetic results and the creative processes. Slow theatre methodology has become a fundamental condition for the company to carry out long and time-consuming creative processes, which allow artistic progress and experience to become a journey of investigation and knowledge

Projecte Ingenu has led a lot of different activities beyond show creation. Training, research, outreach and community theater have been necessary activities for the company’s growth. Projecte Ingenu combines these activities with shows creation, enriching them and feeding them with ideas, people and potential audiences.

The creations of Project Ingenu, today, can be grouped as follows:

Shakespeare trilogy: Hamlet, Romeo&Juliet and I was Prospero, a free creation piece from The Tempest. The 3 pieces inspired by Shakespeare, clearly show the evolution of our language (from a theater based on the word to a poetic staging close to dance-theatre).

Tetralogy of Dissatisfaction: Top Girls, Yerma, inFaust and The Panther Woman. All the plays have in common that the central conflict of the drama is the impossibility of accepting one's own reality. Hence the dissatisfaction as a common denominator of both Marlene (Top Girls), Yerma, Faust or Don Joan. This denominator evidences the thematic concern for the human factor: the conflicting dialogue between the individual and the social.