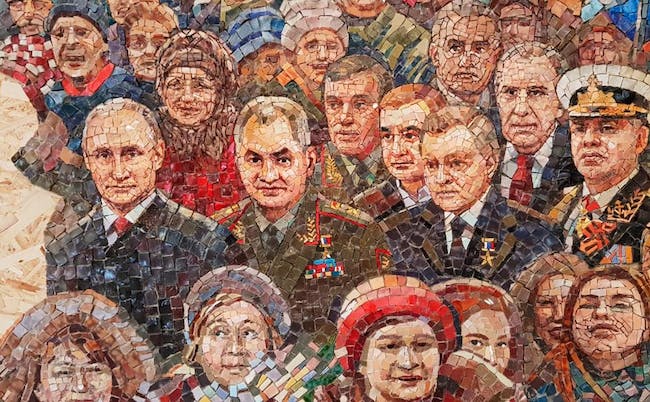 Created on Zoom during quarantine by a conspiracy of actors from Russia and Israel. Political satire. In Hebrew and Russian with English subtitles.

April 2020. Russia. Two weeks left before the great opening of the main temple of the Russian armed forces. Photos of two mosaics from unfinished church appear in the open sources. One of them portrays people on the Red Square in Moscow greeting the annexation of Crimea in spring 2014; and in the middle of the crowd are Putin and his entourage. This image draws a huge wave of criticism in the Russian society and the president has to inform through his spokesman that he opposes such an early perpetuation of his achievements.

Officials begin to claim right here that the mosaic will be disassembled and restored in other place as "historical artifact", The Church representatives go even further and assert that the mosaic has never existed.

But what about the artists who worked on this "masterpiece", how do they feel and go about disassembling of it? Or not disassembling?..

re:hab theatre's idea has formed up in the spring of 2020, when (thanks to Corona pandemic) three theater professionals, like-minded colleagues and friends locked at their homes apart of each other in Russia and Israel, kicked off weekly Zoom meetings to discuss and develop ideas for performing online. The project, that was much contributed by impossibility of public performances yielded, in summer 2020, its first fruit – digital performance "Puh-puh-puh" which filmed mostly on the Zoom platform. Currently the team continues its challenging way through a novel field of digital art exploring relevant ways of interacting with the audience and looking for consonance between classical drama and the instruments of contemporary theatre.

re:hab involves rehabilitation of both, the public and the theater itself, supporting all the participants wherever they're watching, acting or directing a show and providing solid emotional ground in the time of global uncertainty.