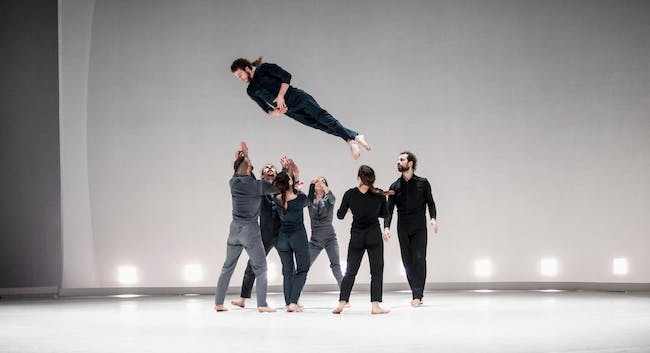 GN|MC continue to explore the notion of time as a fundamental concept. Digging in the idea of infinity as a ceaseless loop and with a constant interest in the joy of repetition, this new work aims to draw our attention to the perception of time, memory and lived experiences, a series of infinite opportunities for time and space to be compared.

SET OF SETS generates repetition and rhythm in the movement of bodies that continually defy gravity as a metaphor for the repetitive nature of existence itself and the idea of persistence. SET OF SETS is a journey based on cooperation, precision and rigor creating an endless maze of bodies in action.

GN|MC Guy Nader | Maria Campos is an independent ensemble based in Barcelona, Spain. The Lebanese and Spanish artists collaborate together since 2006, their works have been shown in various festivals and venues around the world. GN|MC have been invited as guest choreographers to create for different European companies: EnKnapGroup in Slovenia, Eva Duda Dance Company/Movein Mission in Hungary, Tanzmainz company in Germany and XieXin Dance Theatre in Shanghai, China. GN|MC has been awarded the German theatre prize DER FAUST 2017 for their work FALL SEVEN TIMES created with Tanzmainz, Staatstheater Mainz in Germany and recently GN|MC received Prize City of Barcelona 2019.

Guy Nader graduated from Institut National des Beaux Arts at the Lebanese University in Beirut (BA in Drama). He received the danceWEB Europe scholarship in 2012 and he was awarded the first prize in Masdanza International Festival in 2010 for his solo Where The Things Hide. He is associated artist in La Caldera, Barcelona.

Maria Campos studied at SEAD in Austria and in The Netherlands where she graduated from the Amsterdam School of the Arts (MTD) in 2003. She has worked with Meekers, Protein Dance, Sol Picó, Angels Margarit/Cia. Mudances, among others.

After their last creation - TIME TAKES THE TIME TIME TAKES - a quintet with live music premiered in April 2015 at Mercat de les Flors in Barcelona and an ongoing tour around the globe until nowadays, GN|MC’s SET OF SETS revisits the insistence in bringing the physical work to its limits, this time with seven performers on stage and with live music. This new project is based on the partnering work that GN|MC continue to develop throughout their latest works PERPETUUM 2014, TIME TAKES THE TIME TIME TAKES 2015, LOOP DE LOOP, MESH, FALL SEVEN TIMES in 2016, IMPETUS and ROUTES in 2018 and HARMONIC SERIES and PARADIS FANTASTIQUE in 2020.

GN|MC Guy Nader | Maria Campos have been developing their own artistic language through movement, and constantly redefine themselves while searching for a common ground in their individual approach to dance. Both look for a high demanding physicality aiming to push the body into its limits. Seeking for strength and delicacy in movement, they allow a whole spectrum of imaginary to rise, discovering and providing an endless body landscape. Together they have drawn a common interest in the partnering work where they experiment new ways of approaching the relation between two or more bodies, developing strategies and tasks in order to provide the body a distinct image and perception.